Just by looking at Madre Chocolate’s array of chocolate bars, you can tell the founder is someone with endless curiosity. The flavor combinations take inspiration from Latin America and Southeast Asia, and the dark chocolate bars are made with cacao from single farms in Hawaii. What ties it all together is Nat Bletter, who spent years studying the use of plants in countries like Guatemala and Thailand, before teaching himself to make chocolate and ferment cacao, and training legions of Hawaiian cacao farmers how to do the same. His company is a pure expression of his many interests and a window into Hawaii’s growing craft chocolate and cacao industry.

This interview has been edited for clarity and length.

Nat, how did you start making chocolate?

In graduate school I studied medicinal plants, and a Mayan archaeologist friend asked me to write a chapter of her book on traditional uses of cacao. I didn’t know much about chocolate except that I like eating it. But she kept asking me, because she didn’t have anyone else to write it, so finally, with the help of my research adviser, who was a huge chocolate fanatic, we wrote the chapter. It became a 3-year diversion from my thesis, but I got really into it.

When the book came out, my friends said, “We don’t want to read your thick academic book, why don’t you just make us some chocolate?” I’d never actually made chocolate, in all my time reading and writing about the Mayan methods of grinding cacao on stone metates. So we ran down to the local food coop, got some cacao nibs, and threw them in the food processor. What came out was a very coarse drinking chocolate, but everyone loved it.

I started making chocolate on the side, while I wrote my thesis. First in the food processor, then I graduated to a small stone melanger from CocoaTown. I sold at lots of holiday markets, and I started a chocolate company called Pure Origins.

Then I got offered a postdoc at the University of Hawaii so I moved out here. I was studying plants and migration in Thailand and Laos, and I spent a lot of time traveling for research. 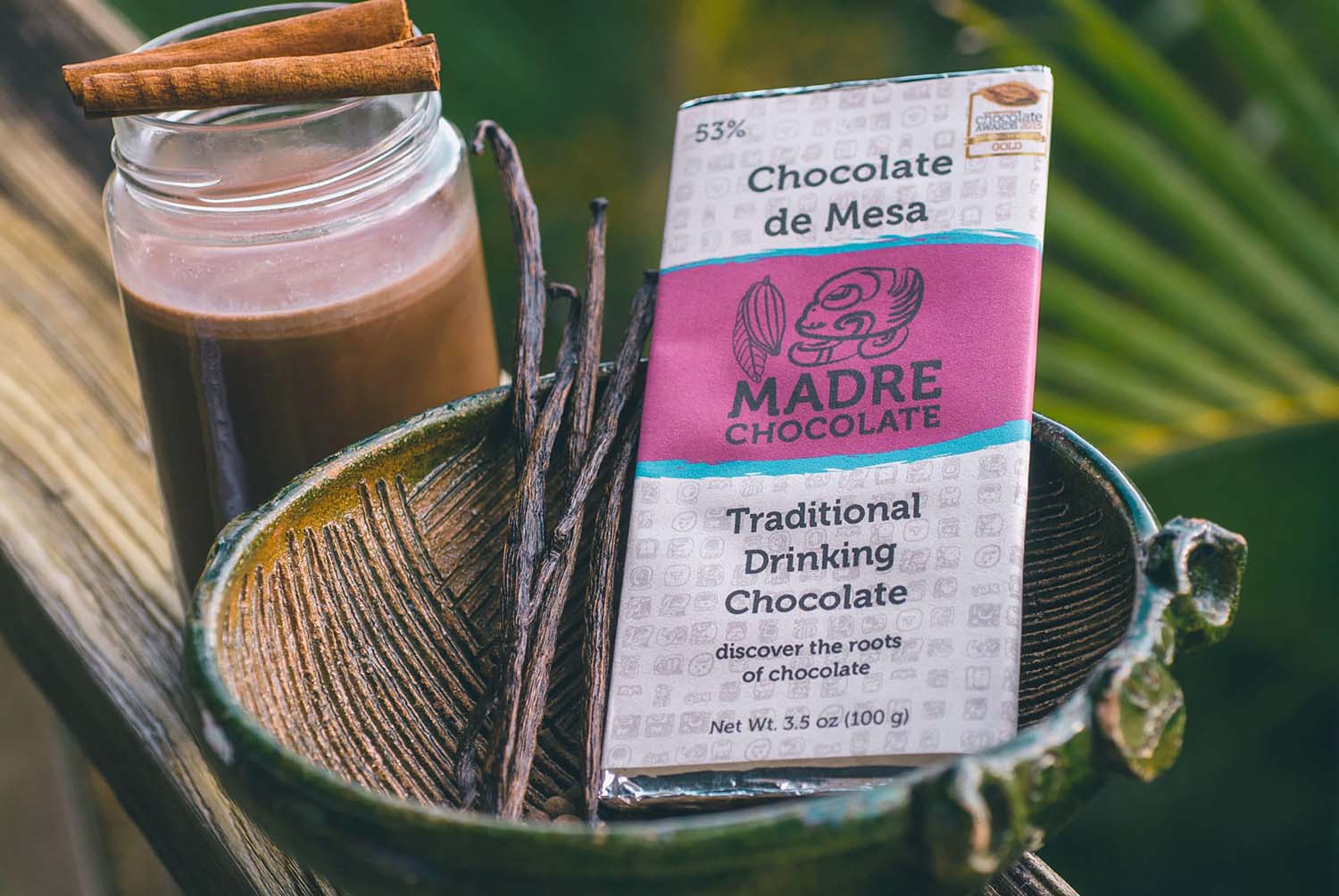 Is dark chocolate popular in Thailand and Laos?

Not really! I brought chocolate as a gift when I went to Thailand, but most of the Thai people I met said it was too bitter. That’s changing now. I’ve been working with Kad Kokoa, who are making chocolate in Bangkok, and they’ve sent me samples of cacao from Chanthaburi and Chiang Mai that are very interesting. I haven’t been to Chanthaburi in 24 years now, but I’d love to go back. I’m looking to help grow the craft chocolate industry in Laos too, I think it’s got a lot of potential.

So it was during your postdoc in Hawaii that you started Madre Chocolate?

Yes, I was in the same building on campus as the Cacao, Coffee and Kava Lab, so I met a lot of people involved in Hawaiian cacao, and I gave them samples of my early chocolates.

I decided to focus first on making good chocolate, really mastering the process. Later, once we won some awards for our chocolate, I started learning more about fermentation. I made some trips to Mexico, Belize, and the Dominican Republic to work with cacao farmers there. We started bringing ideas of cacao fermentation from Central America to Hawaii, and that helped the cacao taste better.

I started the Cacao Bootcamp in Hawaii to teach chocolate makers how to grow and ferment cacao, and teach cacao growers how to make chocolate.

I visited Oahu for the Hawaiian Chocolate and Cacao Association (HCCA) conference a few years back, and it was interesting to see how cacao cultivation in the US is different from other countries I’ve visited in Southeast Asia and South America. You have a different set of challenges.

Yes, Hawaii is quite cold for fermentation, but even more of an issue is that there’s so little arable land, so people are trying to do really small ferments. And there is no historical experience with cacao. A lot of the initial stabs at fermentation turned out pretty funky, tasting like mushrooms.

In Hawaii it’s been kind of an uphill battle to improve the cacao fermentation. Now, with the last two Cocoa of Excellence Awards, we see Hawaiian cacao winning awards, including farmers I’ve worked with. It’s great to see them taking it to a new level. 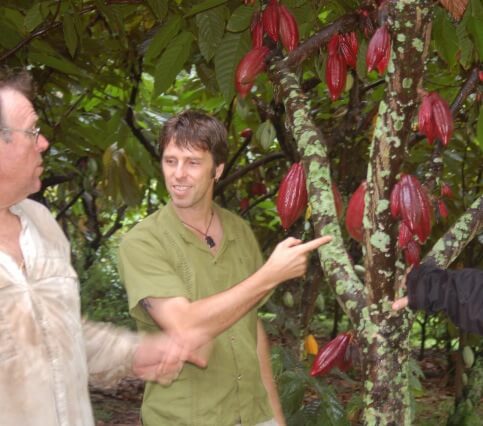 What do you think is the most important factor in determining chocolate flavors?

I talk about micro-terroir, because in my experience, microbes really affect chocolate flavor more than anything else. On the Big Island, I visited two farms less than a mile apart, growing the same variety of Trinitario that’s common in Hawaii. Their cacao and chocolate tasted totally different. One tasted like cinnamon graham crackers, the other one like pineapple and black pepper. They were the product of different microbes, fermenting in different microclimates.

Every valley in Hawaii has different weather, and different tasting cacao.

Hawaiian cacao does have an overall flavor profile – It’s fruity with a high cocoa butter content. I credit this to the cold temperatures we have here, but the volcanic soils and high winds might play a role.

Do you have some cacao farmland of your own?

Farmland would be an exaggeration. Me and my wife live on about a tenth of an acre in Honolulu, but I have managed to squeeze in 64 fruit trees, grafted with 100 varieties. Fourteen of those are cacao trees, and they’re just starting to produce.

My neighbor, who I can see out my kitchen window, has three trees of an amazing Criollo variety, that we just made into what I think may be our best chocolate ever. I’m hoping to help her plant about 20 or 40 trees of that same variety, so that we can make more.

As you make chocolate bars with cacao from single small farms in Hawaii, what do you look for in partners to work with? 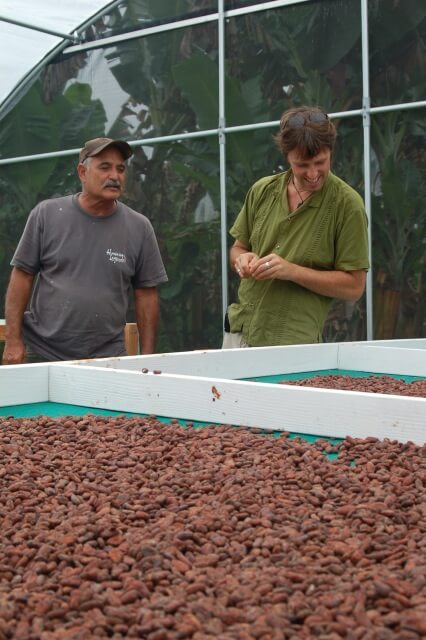 I look for cacao farmers who are willing to adopt new practices, and open to suggestions of improvement. As it turns out, that’s often former engineers – they’re really good at thinking of ways to improve and innovate. I’ve also noticed that a lot of Hawaii’s Cocoa of Excellence winners have been women farmers.

I think three quarters of the flavor of chocolate comes from the fermentation. Throughout the history of chocolate, farmers get very little credit for that. Most often the chocolate maker takes credit for the flavor, but that’s really just the last quarter of the work.

I see a lot of your bars have cacao from Kailua Kona, on the Big Island.

Yes, that’s a farm called Likao Kula, which means “Golden Lotus” in Hawaiian. It’s run by a Thai-American couple, Nares and Gini. It’s really high elevation, 1600ft, so it gets really cold. They had to build a greenhouse to ferment their cacao.

Gini is a former computer engineer, so she’s really assiduous about using technology and keeping records. She tracks the temperature with data loggers, and she’s experimented with different inoculants like wine yeast. She even brought wine barrels from California to use as fermentation vessels.

We’ve won multiple awards with her cacao, and Gini was actually the first Hawaiian cacao farmer I ever met. Just a month after I moved to Hawaii, I went to the Kona Cacao Festival and she invited me to see her farm. Now we’ve been working together for 11 years.

I try to cultivate long-term collaborations with farmers. Since they make most of the flavor of the chocolate, having a good exchange with the farmer is super important.

What can you tell me about your single-origin bar from Nine Fine Mynahs Farm?

Their cacao won the International Cocoa of Excellence in 2017, as one of only 18 producers in the world. I’ve been working with them since they started about 6yrs ago. Jeanne and Bruce came to one of our first Cacao Bootcamps. We visited their farm on Oahu and helped them plan out their cacao field. It’s only about two acres, but they’ve done an amazing job.

I got married on their farm just a few years ago, so I have a strong emotional attachment to that cacao. Until Covid, we did all our cacao farm tours there. They somehow managed to fit a bird sanctuary and wildlife sanctuary into those two acres, too.

That’s how a lot of small cacao farms in Hawaii can be sustainable. I’ve talked with [Hawaii-based cacao consultant] Dan O’Doherty about this, and he says a cacao farm can’t be profitable on its own if it’s less than 5 acres. But if you add in the aspect of agritourism, you can definitely make it work. Making tree-to-bar chocolate and having tours is very popular.

We want to become the Napa Valley of Chocolate. You could take a drive around Oahu and taste 10 different kinds of chocolate, stopping in every valley. You’d notice that in Waiālua the chocolate tastes like gooseberries and brazil nuts, but down here in Waiāhole it tastes like marzipan and oreos. I call that the “Chocolate Epiphany”, when people taste chocolate made with the same recipe but just from different regions, and realize it tastes so different just based on the cacao!

How do you pick ingredients to add to the chocolate for your inclusion bars? 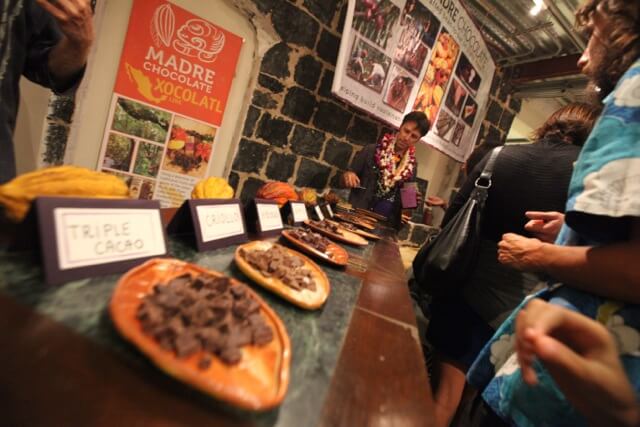 We’re named Madre Chocolate because we’re inspired by the motherland of chocolate, so a lot of our early flavor inspirations came from Aztec, Maya and Zapotec cuisine. I’ve made bars with Chipotle and Allspice, and Horchata with Mexican cinnamon.

We also try to match the inclusions to the cacao origin. With Hawaiian cacao, we like to use Hawaiian ingredients. For example, our Earl Grey Tea bar is made with tea that’s grown on the Big Island.

Our Café con Leche bar is made with coffee from Maui. It has five espresso shots of caffeine, blended into a white chocolate base. We’d like to use Hawaii cocoa butter, but nobody is actually at a large enough scale to produce it yet. So we use organic, fair trade cocoa butter from the Dominican Republic, from the Conacado cooperative.

To make our Passion Fruit bar, we harvest fresh fruit and dehydrate it ourselves. It’s a lot of work, but it’s really delicious. In my studies of medicinal plants, I found out that passionfruit is sometimes used as an anti-anxiety treatment. Having a little bit before bedtime is supposed to help kids calm down. It works for adults too!

Your approach to flavors is so inventive, I can’t wait to see what combinations you come up with in the future!

That’s what’s fun about studying ethnobotany. I find that anywhere I travel, people’s faces light up if you ask them about their national dishes. There’s something about food that really connects people. And we can all travel through chocolate, even if we can’t travel physically right now.

Sonia Gregor is a writer and consultant in the craft chocolate industry, with over four years working at cacao origins in Asia and Latin America. 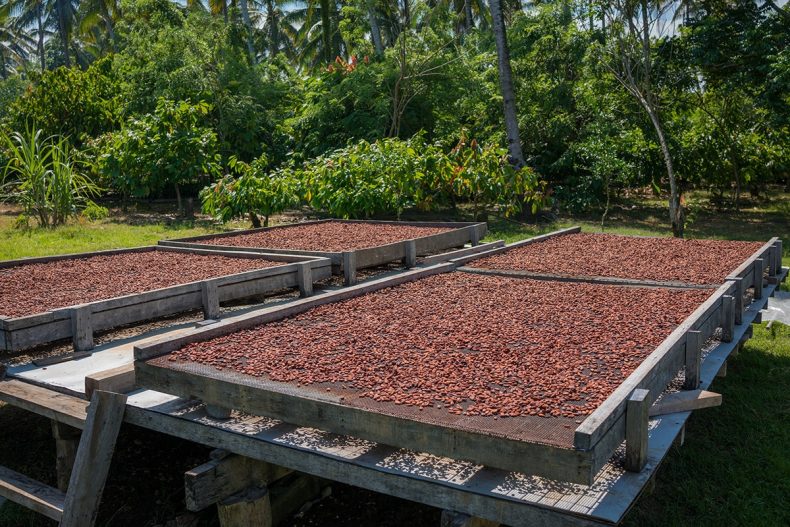 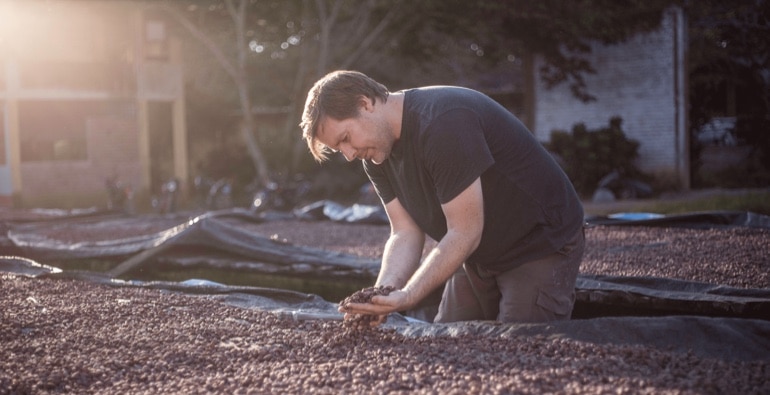 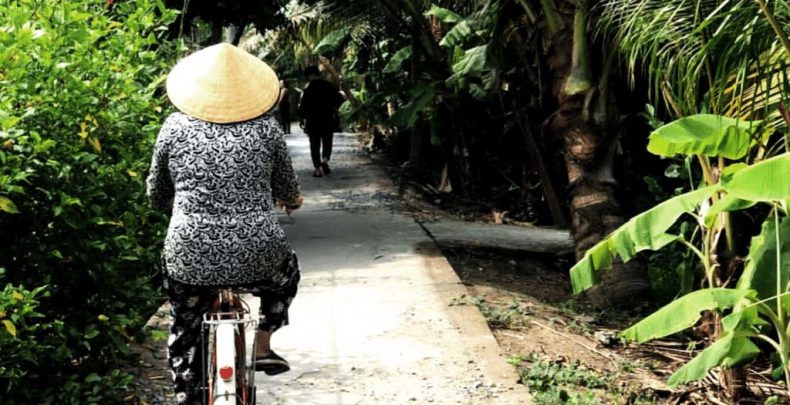